The environmental monitoring is focused on the most relevant variables regarding tree survival and growth that are expected to be modified by the treatments applied (soil conditioners and mulches). The list of variables, as well as the method of monitoring is shown below: 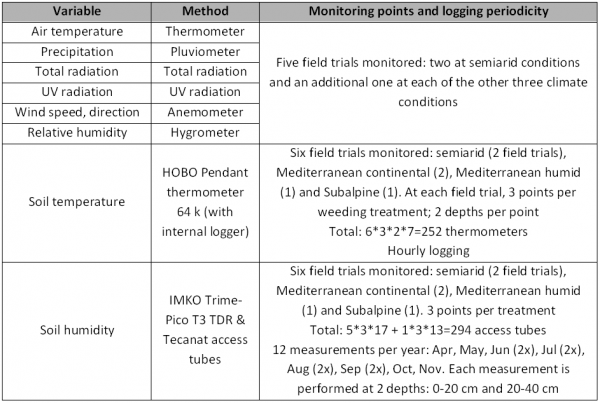 The environmental monitoring equipment was installed between February and April 2014, following the experimental designed described above. Click here to see the pictures of the equipment and the installation process.
The monitoring of plant fitness during 2014 and 2015 includes the following variables and methods:

March-April 2014 (before planting): a preliminary sampling (6 samples x 8 field trials) was performed, aiming at characterizing the most relevant physical and chemical features: Total organic carbon, carbonates, texture and pH.November 2014 (8 months after planting): a new soil sampling was done, for characterizing the effect of the different treatments in soil features. At each field trial six digs were sampled with a cylindrical core sampler, down to 30 cm depth. The obtained cores were divided in situ in three depths: 0-10, 10-20 and 20-30 cm. Each sample (dig x depth) was stored separately, and sent to laboratory. 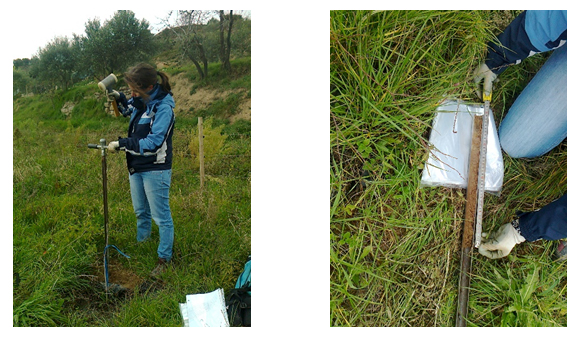 To rationalize the number of analyses to implement, the six samples from each field trial were merged into three composed replicates.

In the laboratory, samples were air-dried to constant weight, and sieved through a 2 mm mesh. A subsample of the sieved soils was finely ground for analysing the main indicators of chemical fertility that are expected to be affected by the treatments applied, as shown below:

The whole description of the soil analyses methodology is provided at the Laboratory tests section of Sustaffor webpage.